After testing the Weaver interoperation mechanisms on basic sample networks, you may be interested in finding out how you can equip an existing real network, whether in development or in production, to exercise these mechanisms. In this document, we will demonstrate how to equip a Corda network and application with Weaver components and capabilities.

The figure below illustrates a typical Corda network. The infrastructure consists of a set of nodes (each maintaining its share of the global state in a local vault), notaries, and CAs. On the nodes are installed one or more CorDapps, representing shared business logic across subsets of those nodes. The core of a CorDapp consists of a collection of workflows (or flows) and contracts acting on states; we layer the flows above the contracts in thebelow image just to illustrate that flows represent transaction (state update) triggers, and contract validations occur during the executions of flows. Further up in the stack lie client applications associated with CorDapps that can are used to trigger flows (and by implication, contracts). 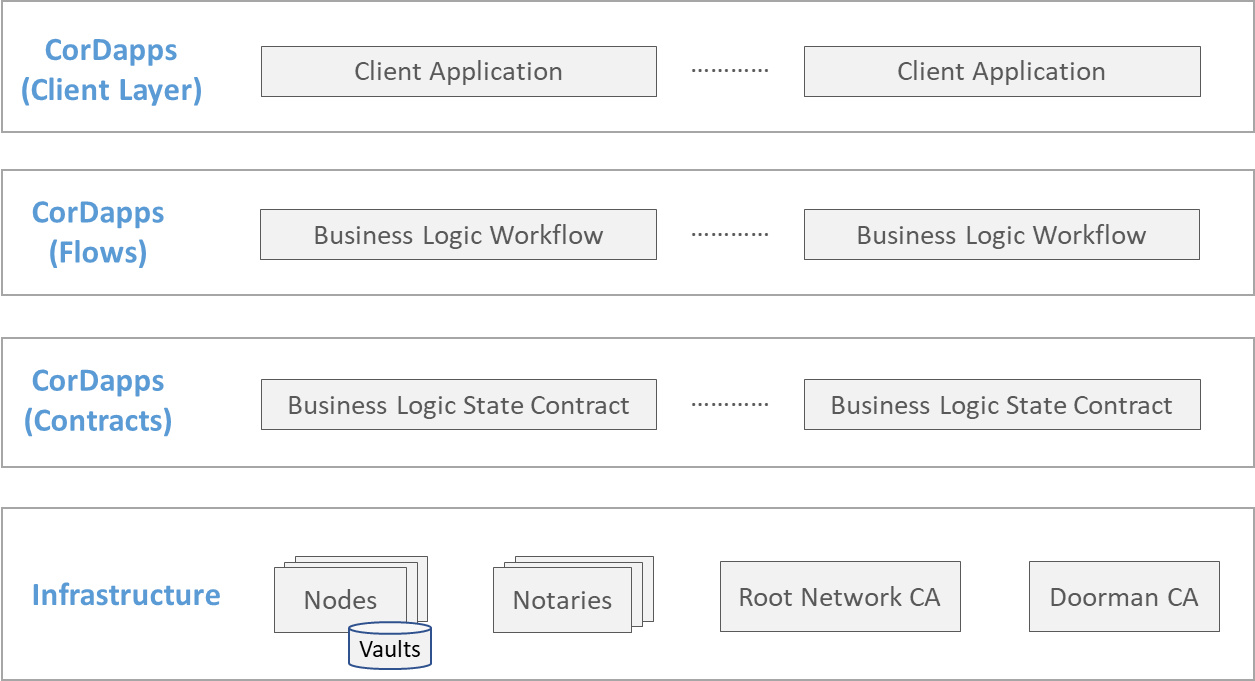 Such a network equipped with Weaver components and capabilities will look like the figure below. Legacy components are marked in grey and Weaver and bridging components in green.

The relay and driver are the only additional infrastructure that need to be installed. One or more relays can be installed, as can one or more drivers. The drivers are illustrated in the client layer rather than in the bottom layer because, though they are coupled with relays, they trigger flows just like any client application does.

Existing CorDapp flows and contracts deployed on the network's nodes remain undisturbed. All that is required is the deployment of an Interoperation CorDapp (flows and contracts) on every node that needs to offer or consume state from foreign networks.

Client applications will need some additional code and configuration because the decisions to exercise interoperation mechanisms (relay queries for data sharing or atomic asset exchanges) are strictly part of business logic. But Weaver's Corda Interoperation Node SDK offers various helper functions to ease this process and keep the adaptation to a minimum, as we wil see later in this document. Finally, an identity service must be offered by the network to expose its CAs' certificate chains to foreign networks, thereby laying the basis for interoperation. This service simply needs to offer a REST endpoint, and can be implemented as a standalone application or (more conveniently) as an augmentation of one or more of the existing client layer applications.

Let us walk through the changes that are required in different phases of your network's creation.

No changes are required in your network's pre-configuration process for Weaver enablement.

To launch a network using containerized components, you will typically use a Docker Compose or Kubernetes configuration file. No modifications are needed to the node's configurations. Sample instructions are given below for networks launched using Docker Compose; we leave it to the reader to adapt these to their custom launch processes.

You can start a relay within a Docker container using a pre-built image. You just need to customize the container configuration for your Corda network, which you can do by simply creating a folder (let's call it relay_config) and configuring the following files in it:

To start the relay server, navigate to the folder containing the above files and run the following:

You can start a driver within a Docker container using a pre-built image. You just need to customize the container configuration for your Corda network, which you can do by simply configuring the following:

To start the driver, navigate to the folder containing the above files and run the following:

To prepare your network for interoperation with a foreign network, you need to record the following to your vault using the Corda SDK (com.weaver.corda.sdk):

Your Corda network is now up and running with the necessary Weaver components, and your network's vault is bootstrapped with the initial configuration necessary for cross-network interactions!