In traditional financial markets parties trade assets such as securities and derivatives for cash or other assets. To reduce risk, various clearing and settlement processes and intermediaries are often involved. One form of settlement is a DvP (delivery versus payment) where the transfer of securities is performed only in the event of a corresponding payment. This arrangement reduces principal risk by ensuring that both parties receive their end of the exchange. However, settlement in financial markets are slow and time consuming. It also involves counterparty risks and requires intermediaries.

Over the past few years, we have been seeing significant efforts in digitising and tokenising both currencies and securities on Distributed Ledger Technology (DLT) infrastructures. On the one hand we have seen concerted efforts around Central Bank Digital Currencies (CBDC) being added to the landscape of other blockchain based payment networks. On the other hand, we have also seen efforts such as that from the Australian Stock Exchange (ASX) to replace its current settlement system--Clearing House Electronic Subregister System (CHESS) with a DLT based platform by 2021.

Against this backdrop, a number of central banks have been exploring the potential of performing DvP settlement across a currency ledger and a securities ledger. In this use case, we use this as a motivating use-case for our discussions. The scenario involves two decentralised ledgers, namely, a currency ledger and a securities ledger, based on different DLT protocols performing a coordinated transfer of assets in their respective ledgers.

The figure below depicts this scenario in the context of two organisations--Org-A and Org-B. Org-B wants to purchase some securities owned by Org-A and both organisations have accounts on both ledgers. This scenario is simplified and leaves out a number of additional real world processes. For instance, the buyer and seller for securities need to discover each other and agree on the price and terms of a sale. In addition, an offer to sell securities might be fulfilled by multiple buyers taking smaller portions of the amount for sale. Such capabilities are often offered by centralised exchanges that offer capabilities such as order books and matching engines to address these needs. In this scenario we instead focus on the settlement process that follows such steps, once the parties of an exchange and the price of the exchange for an asset are determined.

To effect the settlement of this exchange between Org-A and Org-B, the following two transactions will have to happen atomically across both networks: i) transfer of payment from Org-B's currency account in the CBDC ledger to Org-A while at the same time ii) the entitlements of the designated securities are transferred from Org-A to Org-B. The scenario would need to guarantee that after the transaction execution, either both parties have their end of the exchange or neither does and that this exchange is performed in a timely manner.

The settlement of the exchange of securities from Org-A to Org-B in the Financial Securities Network for a simultaneous payment from Org-B to Org-A in the CBDC network is coordinated by Weaver using Hashed Time Lock Contracts. This protocol essentially has three phases:

The process proceeds as follows, and is further illustrated in the figure below: 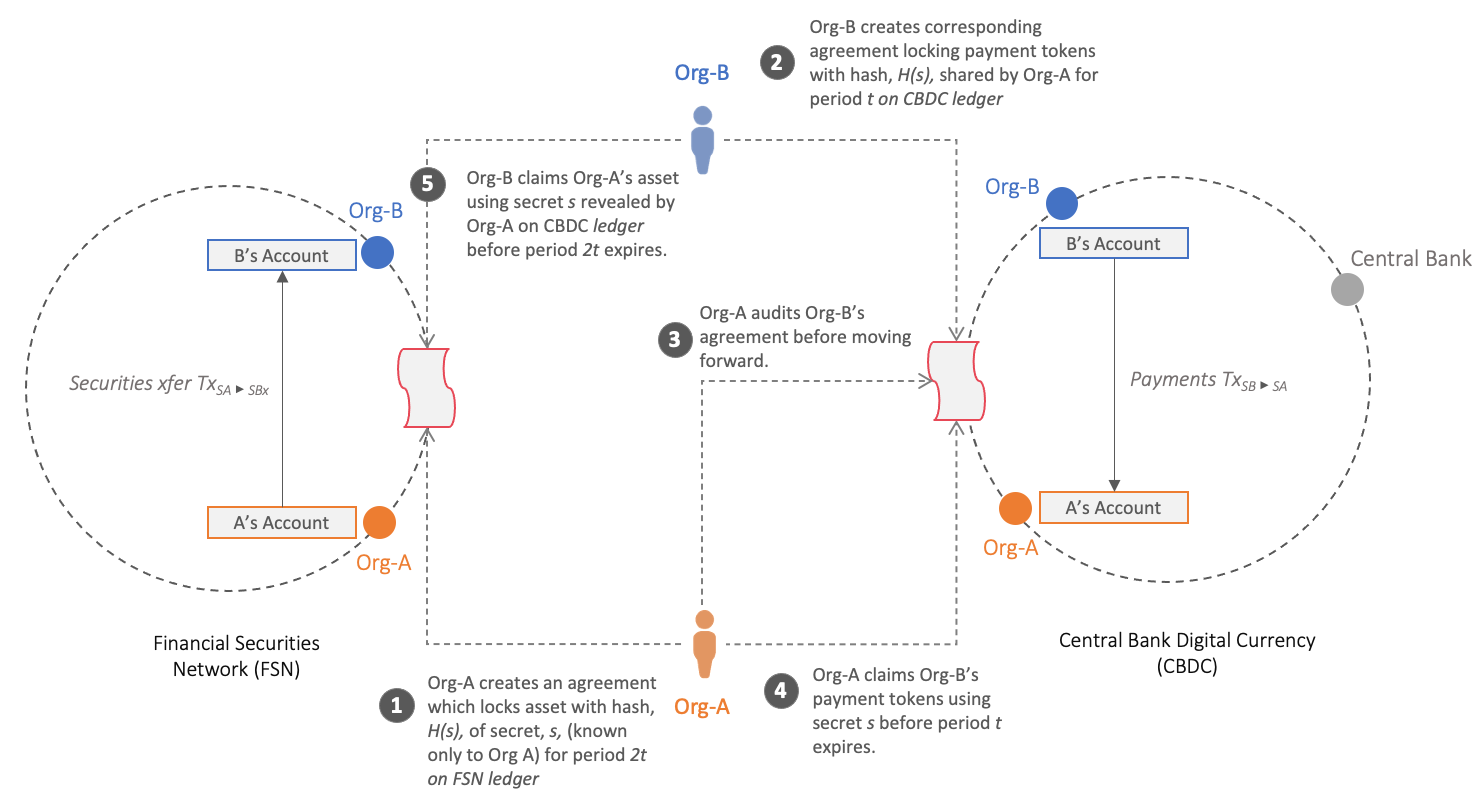