Interoperation for asset or data transfers/exchanges relies on a message-passing infratructure and pan-network data processing modules, as we have seen in earlier pages. But there is yet another crucial basis these data processing modules need to satisfy our design principles of network independence and avoidance of trust parties. This is the ability of a network as a whole and of its individual members to accurately identify and authenticate another network's members.

Further, for the networks to remain independent and interact ad hoc with each other, we cannot impose a central authority that unifies their private identity management systems. So the identity basis of interoperation must be decentralized, leading inevitably to the requirement of exchanging identity information across networks as a pre-requisite for asset and data transfers/exchanges. This is illustrated in the figure below where interoperation protocols are classified in two planes (or tiers), data and identity, with the former depending on the latter.

The simplest identity plane protocol involves a direct exchange of identity information between representatives of the two networks: in other words, an API integration. But this approach suffers from the same drawbacks that API integration in the data plane would. It diminishes a blockchain network to a single trusted spokesperson, exposing that network to risk. Even if such a spokesperson could be designated, appropriately framing access control policies for potentially every other blockchain network in the world would be very challenging. This approach is therefore insecure and not scalable, and therefore ought to be treated purely as a strawman.

Networks as Groups of Self-Sovereign Members​

A secure and sustainable identity plane plaform can be built on the basis of self-sovereign identity and decentralized identifiers. We recognize that:

The distributed identity management infrastructure for interoperation is illustrated in the figure below. We assume the existence of one or more Interoperation Identity Networks (IINs) that act as registries and credential validators for the organizations that form the memberships of blockchain networks.

An IIN can be built from scratch to facilitate blockchain interoperation, but it can also be an augmentation of an existing decentralized identity provider or registry. Its purpose is to maintain identity records and credentials for organizations and validate these to third parties as per the desire of the identity or credential owner. In this model, an IIN can itself be reputed or it can bring together many reputed and trusted identity providers (called stewards) into a shared network. As long as the members of two blockchain networks have shared trust in one or more IINs, an identity plane exchange can be effected, thereby setting the foundation for data and asset transfers.

The ideal IIN architecture is illustrated in the figure below, inspired by Hyperleder Indy, whose architecture is used in our canonical (or reference) implementation. Built on a DLT itself, an Indy-based IIN can provide the combination of assurance and decentralization that a centralized registry cannot. Further, such an IIN will support the entire SSI and DID standard, maintaining credential schemas and verification keys, and issuing verifiable credentials that can be used for privacy-preserving authentications.

An IIN is modeled as a network with a distributed shared ledger, implemented using an Indy Node Pool and running BFT consensus. The ledger is also (ideally) meant to be publicly accessible, though there is nothing preventing our protocols from working with a private IIN.

A canonical IIN maintains the following:

For one blockchain network to discover and validate another in the identity plane, it must trust one or more IINs and trust anchors who can provide that validation. We envision a shared and mutually reinforcing trust among stewards and other anchors within an IIN. An anchor could gain trust by virtue of joining a well-established IIN. Similarly, an IIN bootstrapped with well-known stewards gains trust because of the collective reputations of those stewards.

Examples of entities that can act as stewards or trust anchors within IINs: the Sovrin Foundation (an organization dedicated to enabling open-source digital ID management, and which also maintains Indy), companies like Maersk or Walmart that have founded real-world blockchain networks, companies like IBM or R3 that maintain popular DLT platforms.

IINs don't have to be built on Indy. Alternatives like Sidetree exist, providing similar functionality. There are also various existing DID registries that are already issuing credentials to existing organizations. To the extent possible, we would like to leverage all of this existing infrastructure and not force any network menmber to find yet another identity provider. Therefore, these existing registries or networks can be used as IINs: the only requirement is that they follow the standards for SSI and DIDs and issuing VCs.

Two kinds of credentials (each with a schema and a definition) are maintained on an IIN ledger:

The IIN is used to discover the membership list of a foreign network and establish the authenticity of its members. Memnbership credentials are independent of blockchain networks.

But data plane transfers and exchanges require knowledge of in-network identities and certificates, which are issued by a network's membership manager(s) to peers and clients. These are not shared through IINs for several reasons. First, the volume of this information can be quite high and further it is subject to change based on a network's internal needs. Also, a network or its members may not wish to expose all this information to an IIN, which is designed to be publicly accessible. Therefore, it is infeasible or undesirable to shared network-specific credentials via established IINs. Instead, we will enable the peer-to-peer exchange of such credentials after the membership discovery and validation procedure is complete.

Specifically, the identity information for a network member consists of the set of certificate chains of the membership managers for that particular member (organization). These consist of one or more hierarchies of root and intermediate CA certificates. For example:

Every network member needs a proxy (either an abstraction or a separate module) for communication with IINs and with the members of foreign networks in the identity plane. We use the term "IIN Agent" to refer to this proxy, and illustrate its functioning as a module within a Fabric network through the reference diagram below. 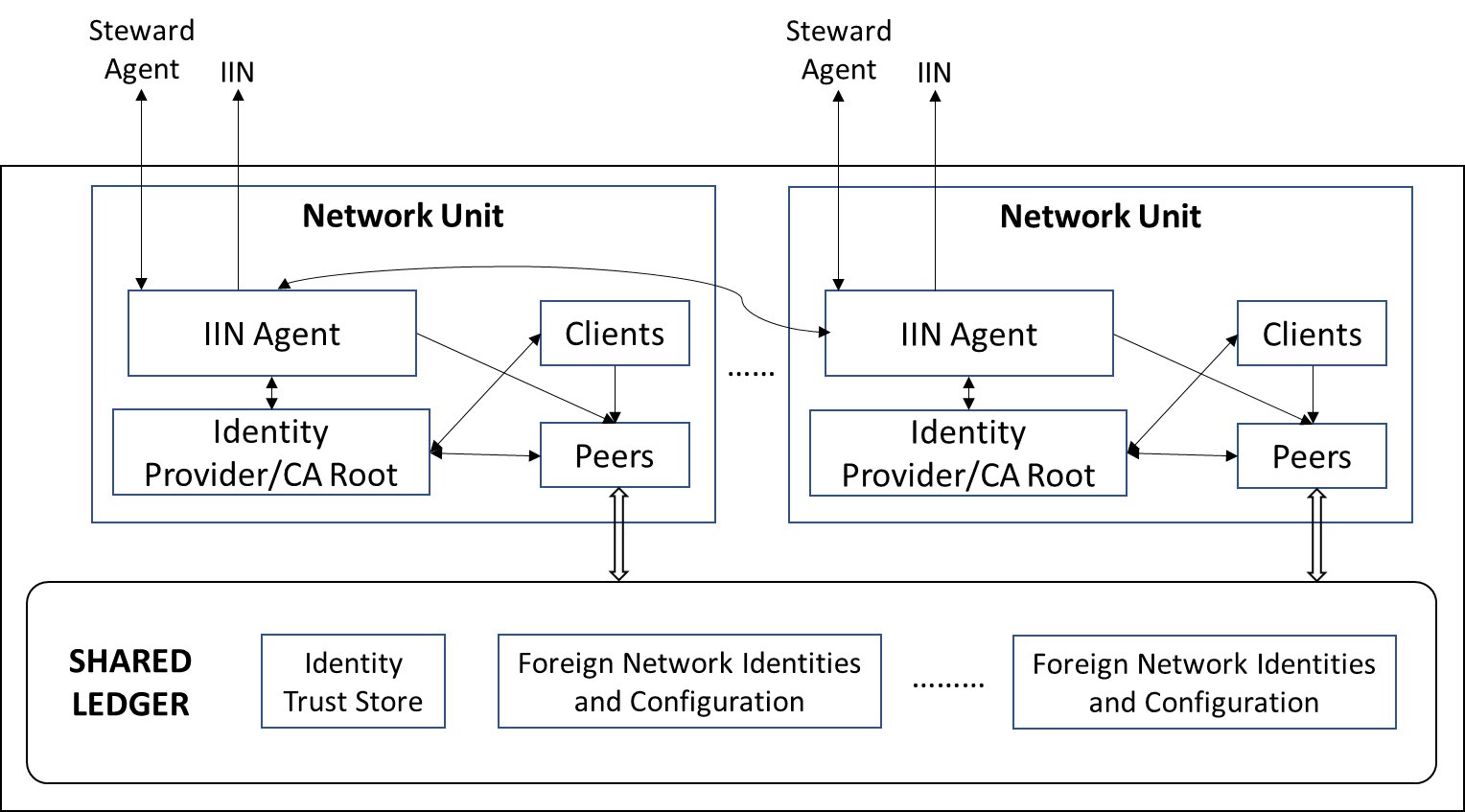 The list of trusted IINs is recorded on the local network's shared ledger, as illustrated in the figure (and thereby agreed through network consensus). To be able to interoperate with another network, the latter's members must have identity records maintained by sume subset of these trusted IINs and their VCs must be issued by these IINs stewards and trust anchors.

Let us consider a scenario where NETWORK 1 and NETWORK 2 wish to interoperate, and their respective member organizations are as follows:

Each network discovers the other's member list and obtains and records ech member's security group to the local shared ledger. We can enumerate these as follows:

Each of these can be done in parallel and each discovery and registration operation is idempotent as long as the security group of a network member does not change.

The high-level workflow for discovery and registration is illustrated below (using NETWORK 2 as the seeker and NETWORK 1 as the provider).

Prerequisites for this process are:

Let us take the example of NETWORK 2 having already obtained the security group info for Org4 and Org5 in NETWORK 1. It is now discovering and registering NETWORK 1:Org3. We assume that there is a single IIN with a single Steward for validating member list as well as membership credentials for all members of both the networks.

Note: we assume here for simplicity that a steward as a reputed identity provider has a mechanism to validate the bona fides of an orgganization and its membership in a given network. There are other techniques involving group signatures that could be applied to corroborate an organization's claim to network membership rather than requiring a steward to use an out-of-band security mechanism, but that is presently beyond the scope of this design.

The discovery and registration procedure steps are as follows:

Note: the last step above (recording to the local ledger via the interop module) may be performed by IIN Agents of both Org1 and Org2 as they have no means of synchronizing their actions, but this recording will be idempotent and hence not cause any harm.

The process above is illustrated with a few more details in the sequence of protocol diagrams below. 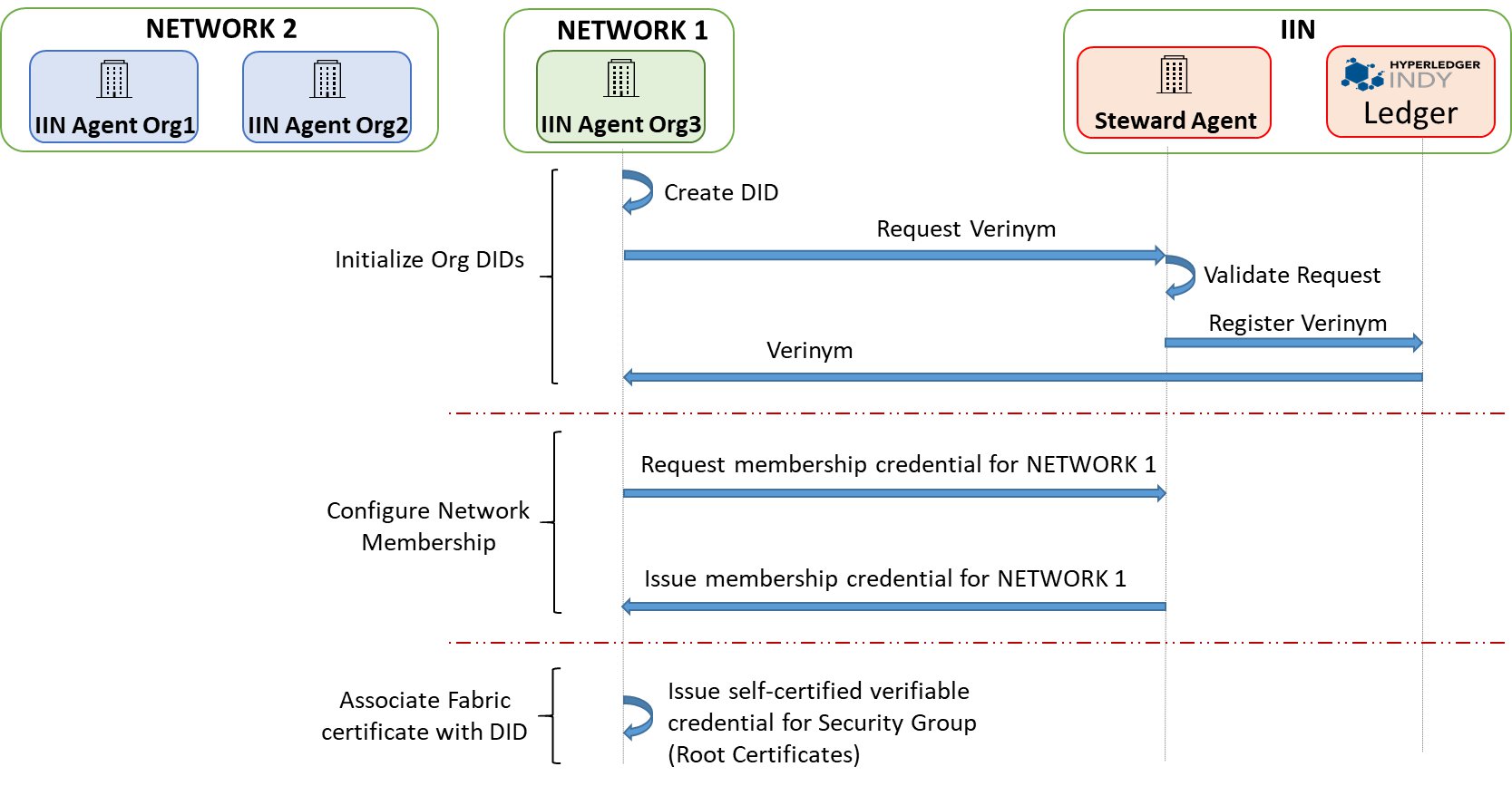 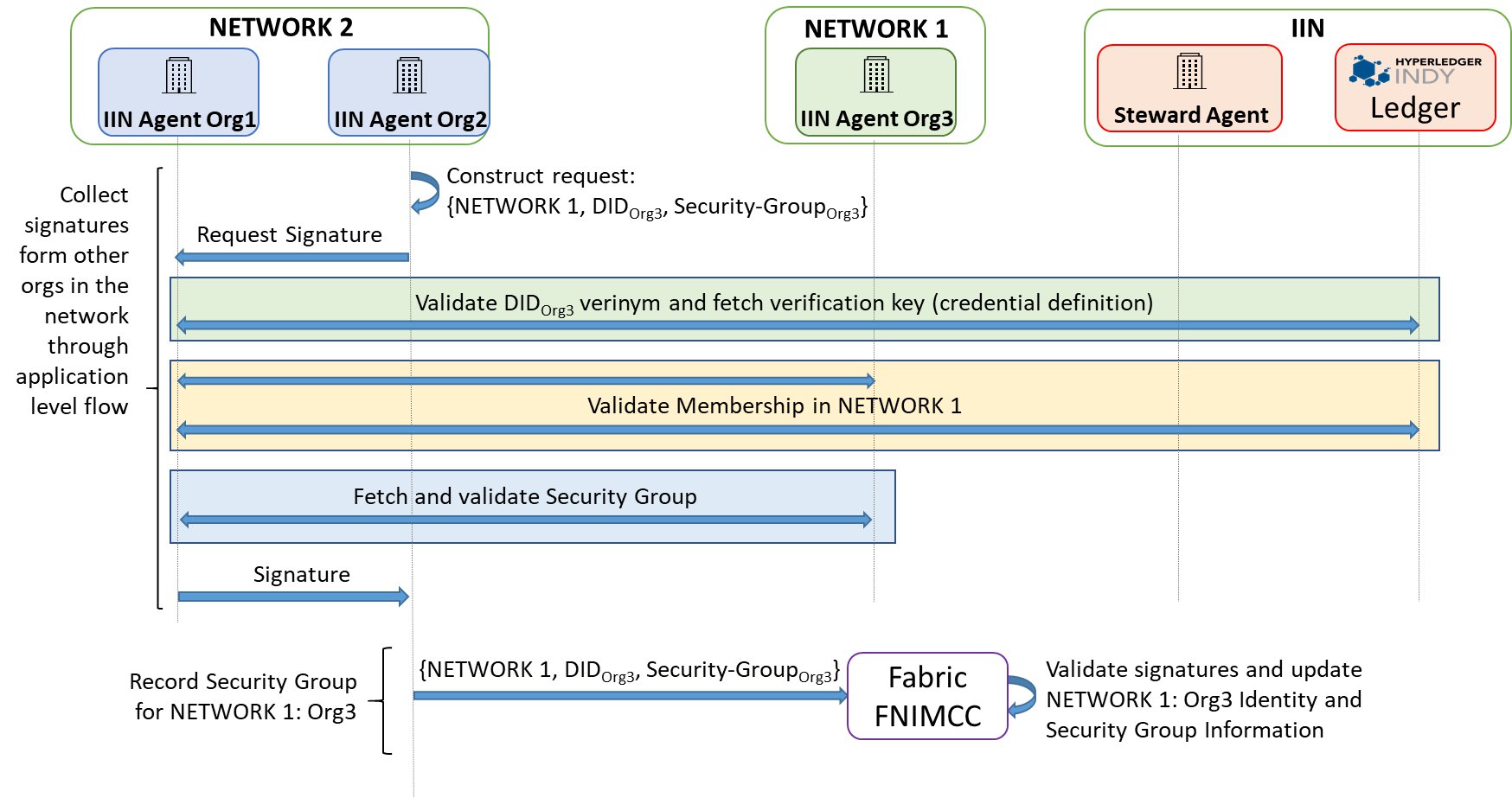